Donald Trump claims he is “immune” to COVID-19 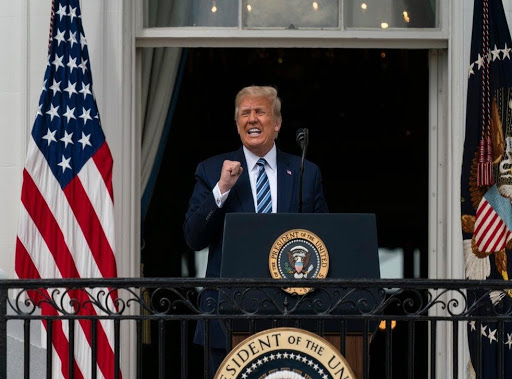 President Donald Trump decided to take to Twitter on Sunday to announce that he is Covid-free and that his doctors at the White House cleared him, after he tested positive this month. Now, he is claiming that he is immune.

“A total and complete sign off from White House Doctors yesterday. That means I can’t get it (immune), and can’t give it. Very nice to know!!!,” the president tweeted to his more than 87 million followers, although according to research, he could be re-infected. According to reports, for at least three months after recovering from COVID-19, reinfection is unlikely, even for those who contracted mild strains. However, it is highly unlikely for anyone to have a lifetime immunity to any disease.

The tweet violated the Twitter’s rules about “spreading misleading and potentially harmful information related to COVID-19.” The message was flagged by the company with a warning, although it was not deleted as the group identified it “may be in the public’s interest for the Tweet to remain accessible.”

Last week, Trump was given clearance to return to the campaign trail. On Saturday, the president’s personal physician, Dr. Sean Conley, revealed that he was no longer at risk of transmitting the virus. Moreover, Trump was also permitted by the doctor to go back to public events in a memo sent to press secretary Kayleigh McEnany. However, the memo did not reveal if the president has tested negative.

“This evening I am happy to report that in addition to the President meeting CDC criteria for the safe discontinuation of isolation, this morning’s COVID PCR sample demonstrates, by currently recognized standards, he is no longer a transmission risk to others,” Conley wrote. “Now at day 10 from symptom onset, fever-free for well over 24 hours and all symptoms improved, the assortment of advanced diagnostic tests obtained reveal there is no longer evidence of actively replicating virus.”

It is expected that the president will hold his first campaign rally since his diagnosis on Monday (Oct. 12) in Sanford, Florida. Until now 7.7 million people were affected by the virus in America, and over 214,000 people died because of it.