Anne Frank statue has been vandalized with swastikas 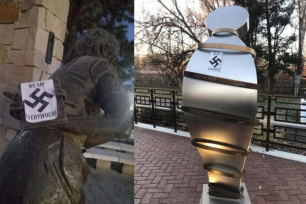 In Idaho, an Anne Frank memorial has become the center of an investigation, since it  has been vandalized with swastikas as well as threatening messages. On Tuesday  (Dec. 8), it was revealed by The Wassmuth Center for Human Rights in Boise that  this important memorial was vandalized after people stuck hateful stickers. In the  memorial, one can see Frank holding her diary and watching from the window of the  secret annex.