In New Visual Rich The Kid, Quavo, and Takeoff are “Too Blessed” 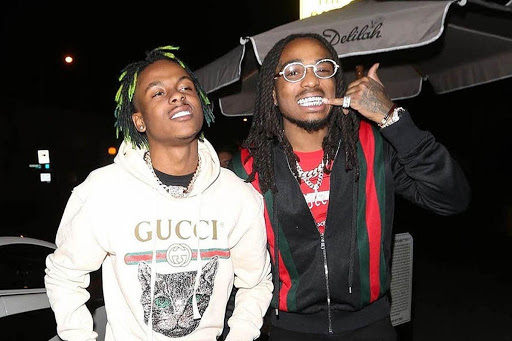 In New Visual Rich The Kid, Quavo, and Takeoff are “Too Blessed”

Since the onset of the coronavirus pandemic across the world, Migos have been vowing to release a Quarantine Tape, which would come before the Atlanta trio’s official follow-up to Culture II that topped the charts. The latest track labelled “Too Blessed,” comes after the previous releases of “Taco Tuesday,” “Need It,” which was created with the assistance of YoungBoy Never Broke Again, as well as “Give No Fxk” with Travis Scott and Young Thug. The new release features group members Takeoff and Quavo collaborating with Rich The Kid for a party on wax, produced by DJ Durel:

“Running the streets, just flex, my gang, they having baguettes, carats around my neck, bad b***hes taking X, the checks, nevertheless, we too blessed, never possess, it ain’t no stress…/”

The video is in line with the debaucherous nature of the song as it features cars, money, jewelry, and many beautiful women at a fun pool party.

Way back in 2018, Culture II was released and featured 24 tracks, and artists like 2 Chainz, Post Malone, Nicki Minaj, Cardi B, Travis Scott, Ty Dolla $ign, Big Sean, Gucci Mane, Drake, and 21 Savage featured in the album. Similar to its predecessor released in 2017, Culture II reached the top spot on the Billboard 200 as 199,000 album equivalent units were purchased. The three members also released independent projects — Quavo’s Quavo Huncho and Takeoff’s The Last Rocket, both of which released in the same year, while Offset’s delayed Father Of 4 released in 2019.

Even Rich The Kid is satisfying his fans with many beats, and in March, his third studio album Boss Man was released. Although it did not reach the top of the charts as music by his collaborators did, the project did deliver several hits as well as assists from many of the artists mentioned above.

Now, all we have to wait for is Migos’ Quarantine Tape soon.