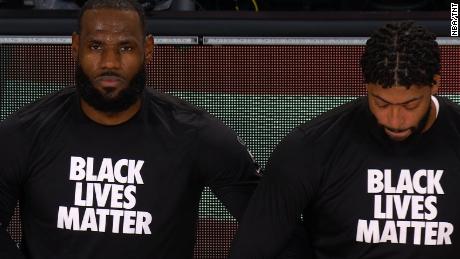 On Thursday (July 30), LeBron James and a few different players took a knee during the singing of the National Anthem.

During the anthem, a portion of the players bolted arms while they took a knee. James and a few others rocked Black Lives Matter shirts before the game began. The kneeling was done to say something about racial inequality in the midst of the continuous protests in America.

While tending to the political statement, James clarified that it wasn’t done as a type of diversion. “The game of basketball has always been bigger than just a ball and a rim and 10 guys on the floor, four referees,” he explained. “We used this platform to spread a lot of positive, a lot of love throughout the course of the whole world.”

James added that he needed to make Colin Kaepernick, the previous quarterback for the 49ers, proud for his ceaseless endeavors to challenge police brutality and bigotry. “I hope we continue to make [Kaepernick] proud,” the power forward said. “Every single day I hope I make him proud of how I live my life, not only on the basketball floor, but off the floor. I want to always speak out about things that I feel like are unjust. I always want to be educated on things and always go about it that way.”

“[Kapernick] was someone who stood up when times weren’t comfortable, when people didn’t understand, people refused to listen to what he was saying,” James continued. “If you go back and go look at any of his postgame interviews when he was talking about why he was kneeling, it had absolutely nothing to do about the flag. It had absolutely nothing to do with the soldiers, the men and women that keep our land free.”

All the more as of late, news broke that the LeBron James Family Foundation will offer lodging for disadvantaged families. The high rise is furnished with a pantry, supply room, open air physical territory, study room and nursery.