NFL to paint “end racism” and more in end zones 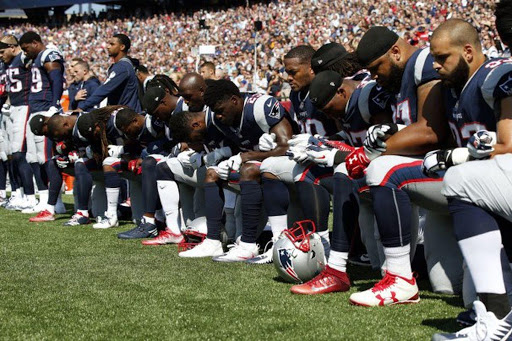 NFL to paint “end racism” and more in end zones

Social justice messages will be painted by NFL in end zones prior to their upcoming 2020 season. Reportedly, NFL Commissioner Roger Goodell confirmed that ideas such as “End racism” and “It takes all of us” will be painted on the fields.

Breer took to Twitter to write “NFL commissioner Roger Goodell says on a call that the phrases ‘End Racism’ and ‘It Takes All Of Us’ will appear in the end zones this year.”
“The NFL stands with the Black community, the players, clubs and fans confronting systemic racism,” Goodell said during the call, per NBC Sport’s ProFootballTalk. “We will not relent in our work.”

This comes after the NBA and WNBA’s decision to paint “Black Lives Matter” on basketball courts. The leagues have also permitted players to don social justice messages, and in WNBA, players wore jerseys with the names of those who were victims of police brutality.

Just last week, basketball, hockey and tennis players either boycotted or temporarily halted their games in order to protest the police shooting of Jacob Blake. Although the NFL season will not begin until Sept. 10, MVP Lamar Jackson and the Baltimore Ravens issued a statement wherein they expressed that they were proponents of the protests and police reform.

“With yet another example of racial discrimination with the shooting of Jacob Blake, and the unlawful abuse of peaceful protestors, we MUST unify as a society,” the statement read. “It is imperative that all people — regardless of race, religion, creed or belief — come together to say ‘Enough is enough!’”

Moreover, the statement also elaborately discussed the demands, including the arrests of the officers involved in both Blake and Breonna Taylor’s shootings; a Senate vote for the George Floyd Justice in Policing Act of 2020; criminal justice reform and more.

“We will use our general platform to drive change now,” the team added. “Not just for our generation, but for the generations that follow, for our sons and daughters and for their children.”

Finally the nfl is taking a stand against racism. Hopefully they let Kaep play again