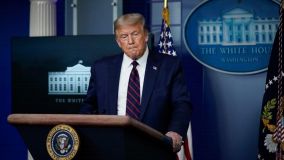 In the particular episode of “Trump supporters being absolutely terrible,” it can be seen that  a venture capitalist whose donations amount to $2.5 million which went towards a pro-Trump  group working on election voter fraud investigation is asking for his money back as he is  unhappy with the efforts. According to reports, True the Vote Inc. is being sued by Fred  Eshelman, who is reclaiming the money he donated.

It’s crazy because you hear silver black ppl in favor of him because of what he’s done for black ppl but on the other end he just had a black man executed.