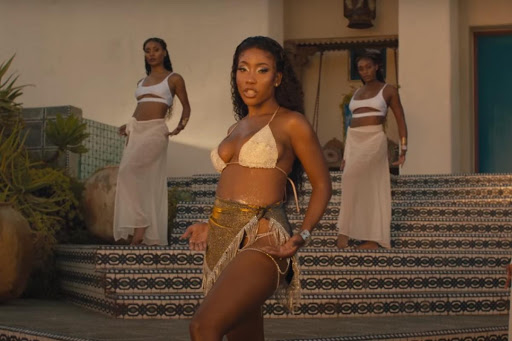 Nigeria’s very own Davido assisted this track, and the song includes a stunning new visual, in which literally everything is gold in color. On the BONGO ByTheWay-produced track, the singer delves into the topic of keeping the spark alive:

“Don’t know where to start. When I was fightin’ now you light my spark. Them hoes they touch you but you have my heart. We barely trust but it felt so right, I throw it back at you and grip you tight. I was the only one that knew what you like.”

While Sevyn Streeter is popular for her singing, she has also been helping out her fellow artists with lyrics in the last few years as well. She also received a GRAMMY Award for her songwriting, after writing six songs from Chris Brown’s GRAMMY winning album Fame and two more songs from Alicia Keys’ GRAMMY winning album Girl on Fire. She wrote several renowned songs including Chris Brown’s “Fine China,” Tamar Braxton’s “All The Way Home,” Alicia Keys’ “New Day,” and Ariana Grande’s chart-topping hit, “The Way.”

In 2020m Davido has several assists to boast of, such as visuals for “D&G” with Summer Walker, “Intro,” and “Fem.” He also worked on other songs such as Khalid and Disclosure’s “Know Your Worth (Remix),” Snakehips and Jess Glynne’s “Lie For You,” “Betty Butter” with Mayorkun, and “Abracadabra” with BOJ and Mr Eazi. Recently, he was also a part of Preme and Popcaan’s newest single titled “Comfortable.”

She continues to shine!